Freedom House is South Korea’s northernmost facility inside Panmunjom, opposite North Korea's Panmungak. The MDL runs between the two buildings.
It is responsible for promoting inter Korean communication and Red Cross talks between the two Koreas. The original Freedom House was completed on September 30, 1965 as a pair of two-story structures measuring 38m long by 8m wide (397m² in total floor space). An octagonal pavilion was set between the two buildings. Freedom House was rebuilt in 1998 as a single four-story structure with basement, for a total floor space of 4,742m².

In September 1971, a standing liaison office was established inside Freedom House for inter-Korean Red Cross talks, and two hot lines were installed. Freedom House thus served to facilitate communication between the two Koreas. This was also a venue for inter-Korean talks and meetings in the 1970s and 1980s. However, Tongilgak was built on the North Korean side in 1985 followed by Peace House on the South side in 1989, after which the inter-Korean talks were conducted at Peace House and Tongilgak on a rotational basis.

Meanwhile, the meeting between the U.S. President Donald Trump and North Korean leader Kim Jong-un was held at Freedom House in June 2019. 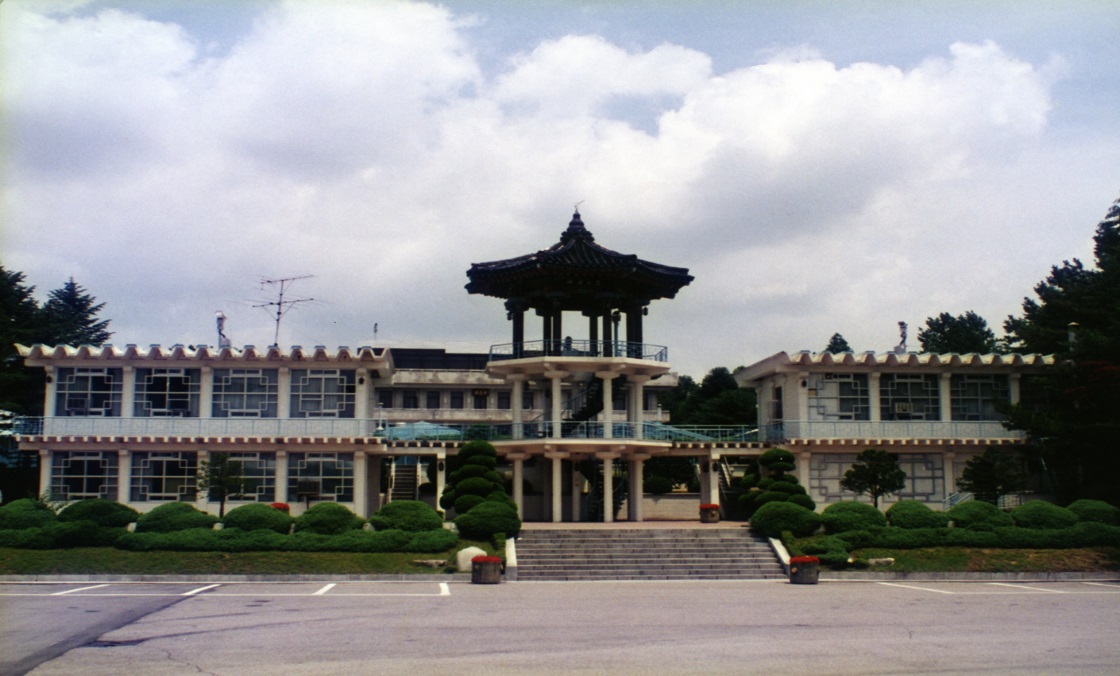 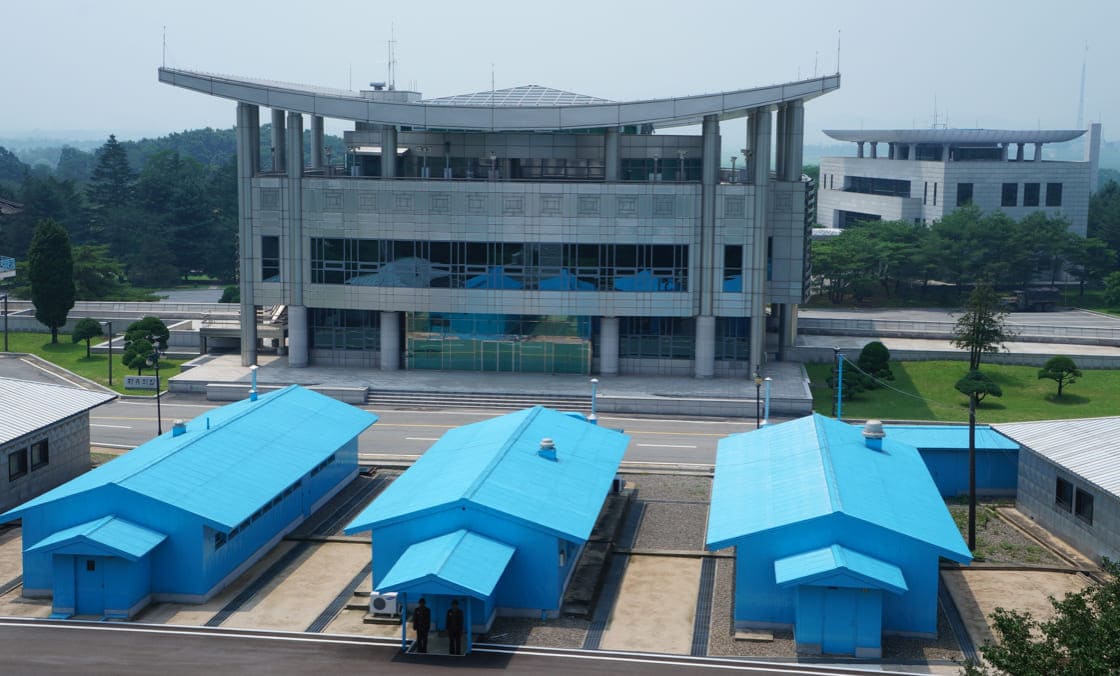 Peace House is a conference venue completed on the South Korean side on December 19, 1989 to facilitate inter-Korean dialogue. The three-story building with one basement level has 3,293m² in total floor space. The VIP and press rooms are on the 1st floor, the conference hall on the 2nd, and banquet hall on the 3rd. More than 100 inter-Korean talks had been held here as of 2018. The inter-Korean summit held at Peace House on April 27, 2018 was particularly significant, as North Korea’s supreme leader visited South Korea for the first time ever on that occasion.

Peace House originally served as an inter-Korean meeting venue. South Korea installed a liaison office at Peace House in February 1992 as laid out in the Inter-Korean Basic Agreement, and the North did the same at Tongilgak in September of that year. Thereafter the two sides have communicated over hot lines or through the direct contact of liaisons, and the inter-governmental and Red Cross liaison tasks were separated. South Korea moved its liaison office to the newly-built Freedom House in 1998. That office has been closed and reopened repeatedly, depending on the state of inter-Korean relations. Sometimes the atmosphere turns cold such as after a South Korean tourist was shot by North Korean soldier at the Mt. Geumgang resort. Time is then needed for the relationship to thaw. 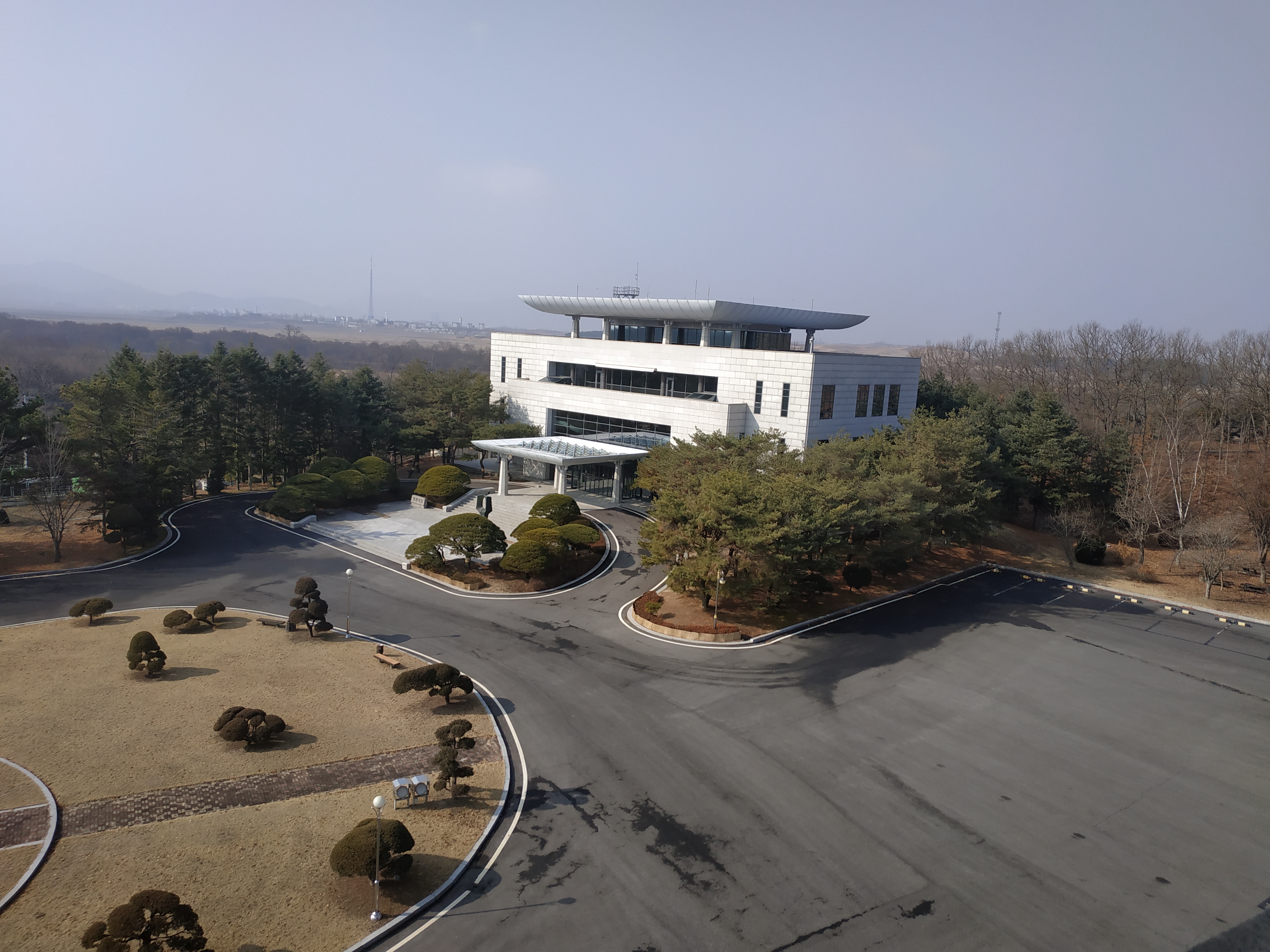 Panmungak stands is on the North Korean side of the MDL, opposite Freedom House. In September 1971, the North set up a standing liaison office at Panmungak for inter-Korean Red Cross talks, and the liaison duties related to the Red Cross remain assigned to this site. North Korea kept Panmunjom closed to the public until 1964, eleven years after the Armistice Agreement was signed. Today, however, Panmungak is a tourist attraction for North Koreans, who can now look out the South Korean half of Panmunjom from there. 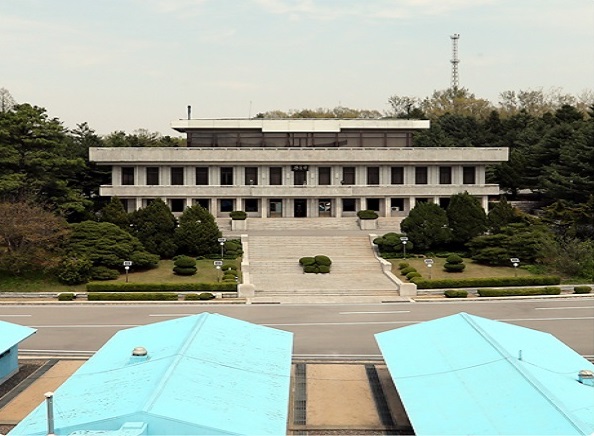 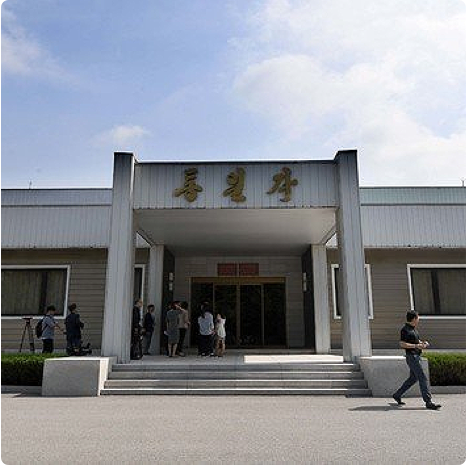 These three blue buildings are, from left to right, called T1, T2, and T3, with the letter t standing for “temporary.” T1 is the NNSC meeting room; T2 is the main conference room for the Military Armistice Commission, and T3 has a room for MAC meetings of secondary importance.

T2 is shared by the two Koreas and the only building open to tourists, who may visit from either side.Visitors are allowed in on a first-come, first-served basis to prevent tourists from both sides coming into contact. When tourists from one side enter T2, guards are posted inside and outside to secure their safety.

Originally, people from both sides were able to freely move around inside JSA, but the area was divided at the MDL after the Axe Murder Incident on August 18, 1976. Since then, in principle, people on one side are not allowed to cross the MDL to the other side. However, the MDL is not in effect inside T2, so visitors can cross the MDL there.

The four-meter-wide strip between T2 and T3 was where President Moon and Chairman Kim met and where the leaders of the two Koreas and the U.S. came together. Persons from the south who visit the North return via this strip, and the repatriation of North Koreans is done here as well. 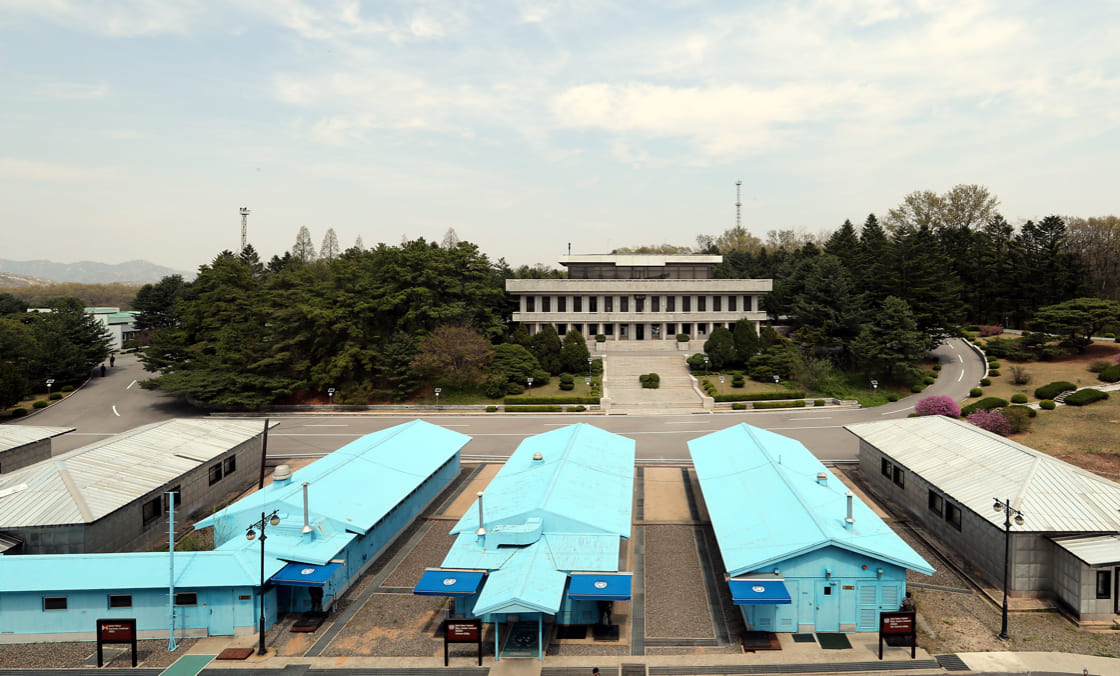 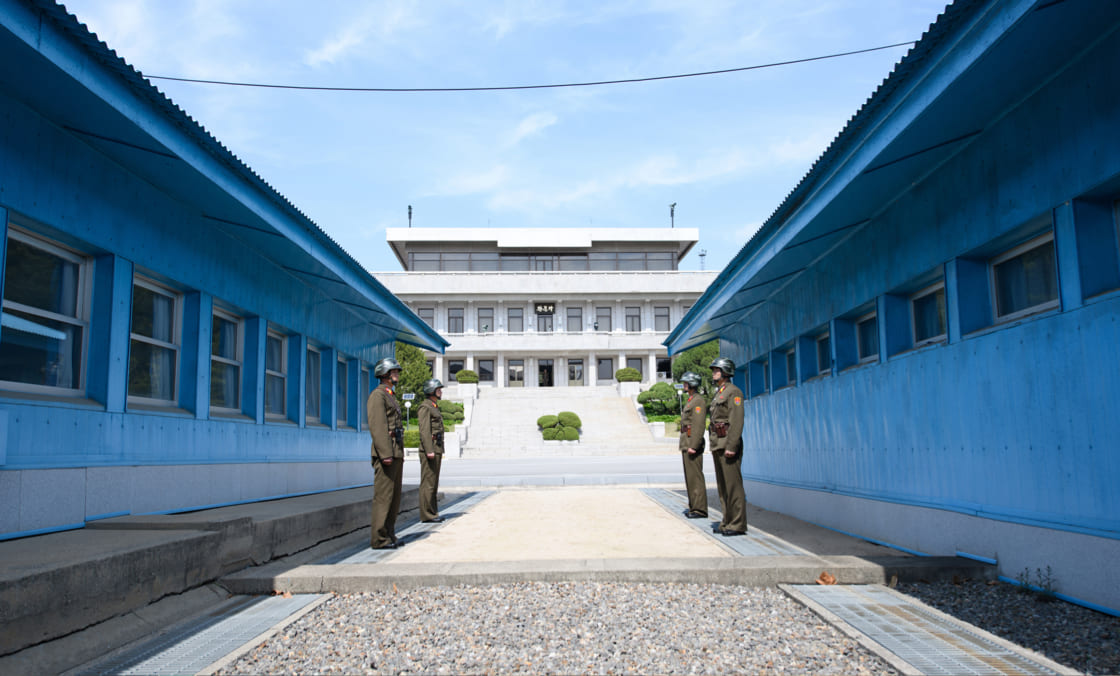 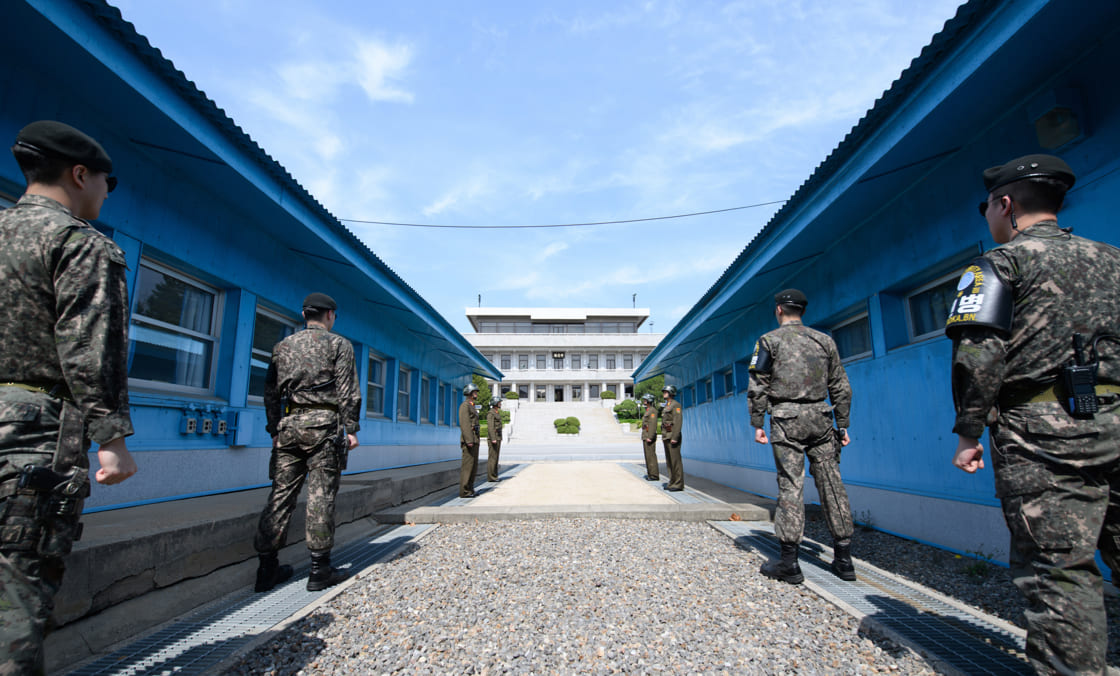 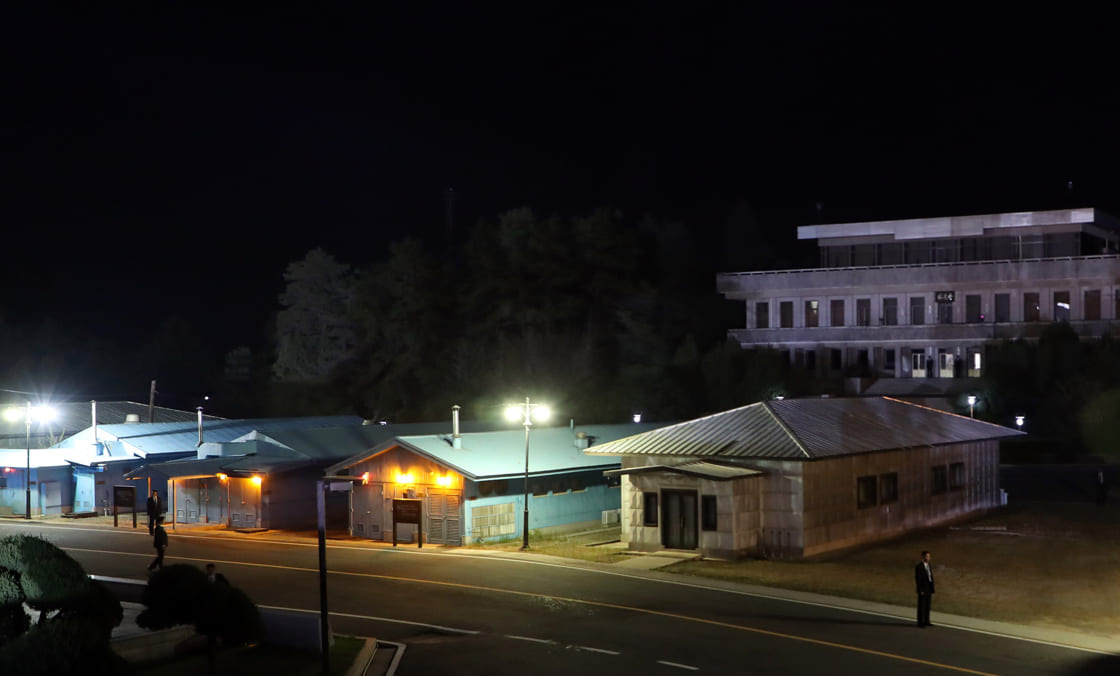 The two Korean leaders replanted a 65-year-old red pine together on the MDL as a symbol for turning sixty five years of inter-Korean confrontation and military tension into peace and co-prosperity. The red pine is common across the Korean peninsula and beloved by all Koreans. It was selected as a commemorative tree, expressing the hope of reuniting the ecosystem of Baekdu Daegan (a watershed line extending from Mt. Baekdu in the North to Mt. Jiri in the South).

The pine was first planted in 1953 after the Armistice Agreement was signed. Thus, the tree has, along with the Korean people, witnessed the pain of a divided Korea for sixty five years, and it can also represent the healing of past scars and taking the first step toward peace and co-prosperity. When the tree was replanted in 2018, the two leaders used dirt and water from symbolic mountains and rivers in the two Koreas: Mt. Halla and the Han River in the South and Mt. Baekdu and the Daedong River in the North.

The commemorative stone in front of the tree is of granite from Paju city in South Korea, and it is inscribed with the phrase "planting peace and prosperity" made by President Moon. The native Korean calligraphy was written by a renowned calligrapher who won the 2014 Korean Art award.

After replanting the tree, President Moon said, "We don’t plant just a pine tree, but plant peace and prosperity." Chairman Kim responded by saying, "Despite many difficulties, a new spring has come to us. We must cherish and nurture it going forward." 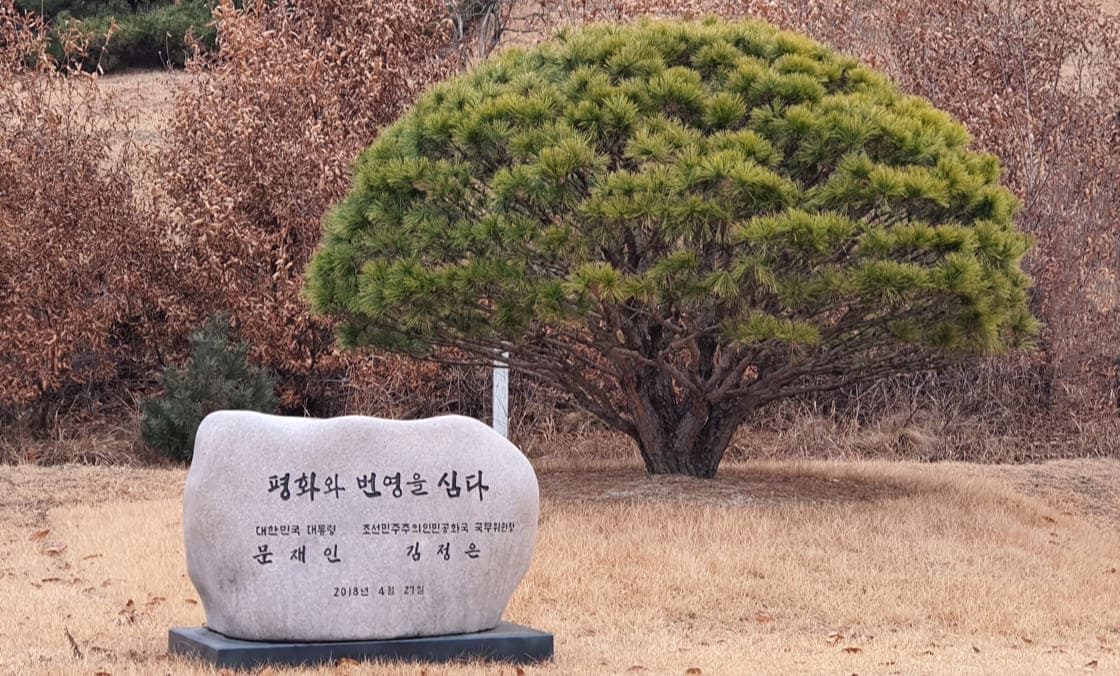 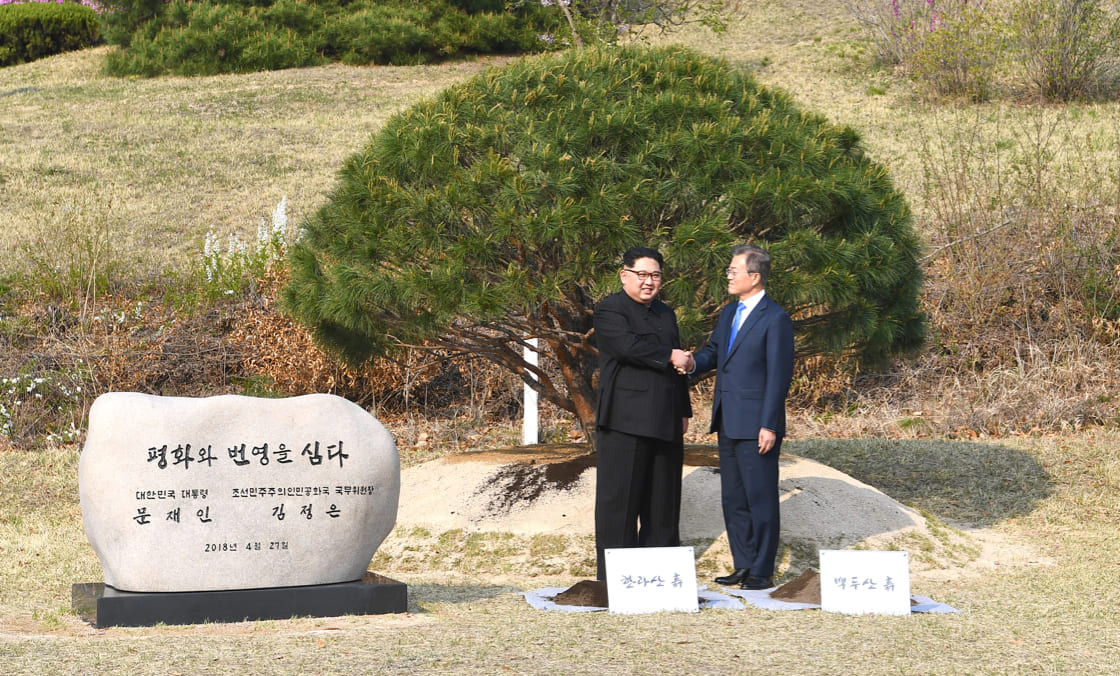 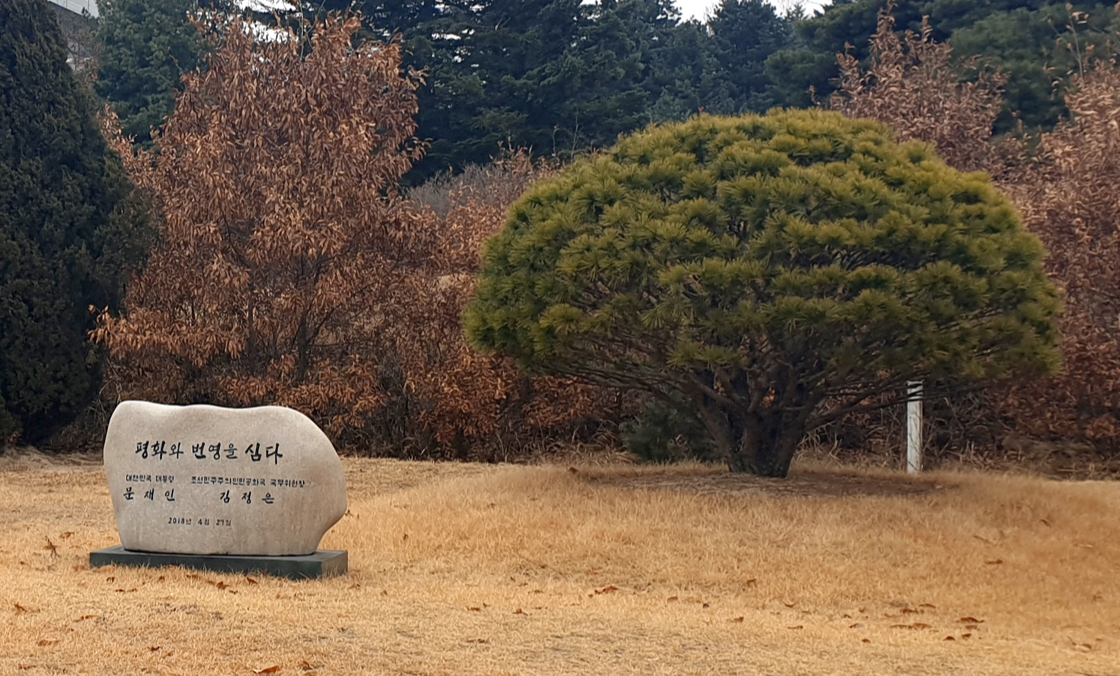 Foot Bridge is a shortcut over a swamp between the Neutral Nations Supervisory Commission (NNSC) camp, on the South side of the MDL, to Conference Row (T1, T2, T3). It is called Dobo-dari (“Walking Bridge”) in Korean, and as a UNC facility, the bridge is painted the UN’s official shade of blue. Therefore, it has also come to be known as the Blue Bridge.

Foot Bridge was in the spotlight when the two Korean heads of state walked on it together during the inter-Korean summit on April 27, 2018. Originally built in a simple straight line, the bridge was extended to create a T-shaped structure where the two leaders could sit for refreshments during the summit. A rusty marker bearing the phrase “MDL 101” stands next to the tea table, but the surface is so corroded it hard to read. A total of 1,292 MDL markers were set at 200m intervals between the Imjin River estuary to the East Sea. The marker standing next to Foot Bridge is the 101st in the series. The UNC wanted to replace it, but the South Korean government decided to keep the old one because it can represent the pain of division well. 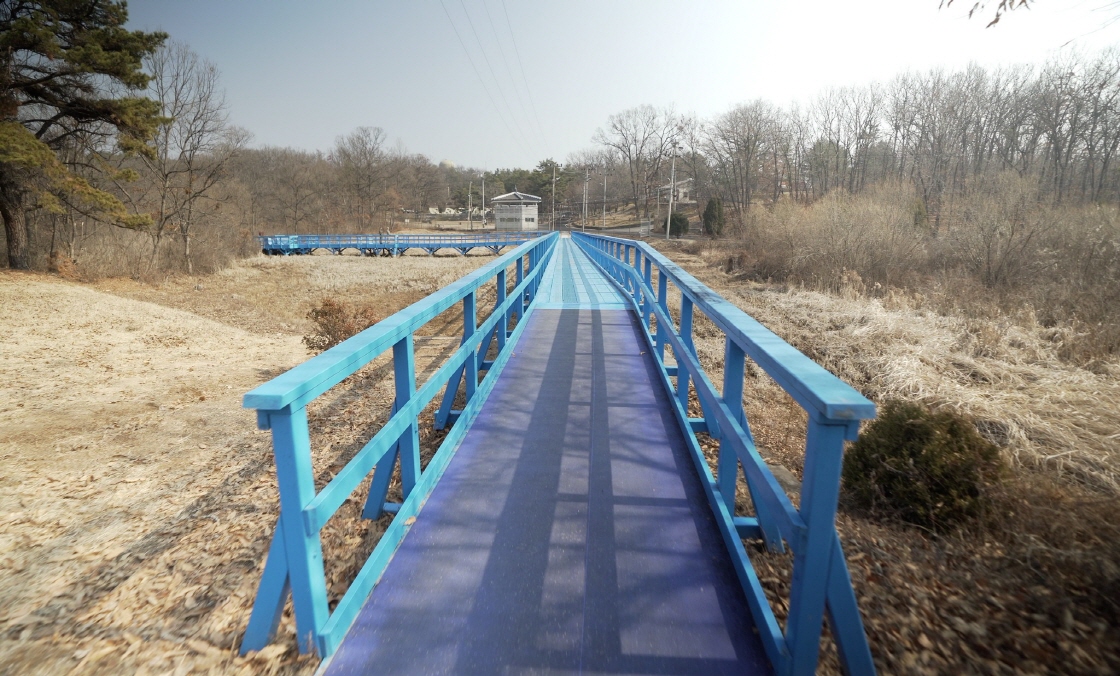 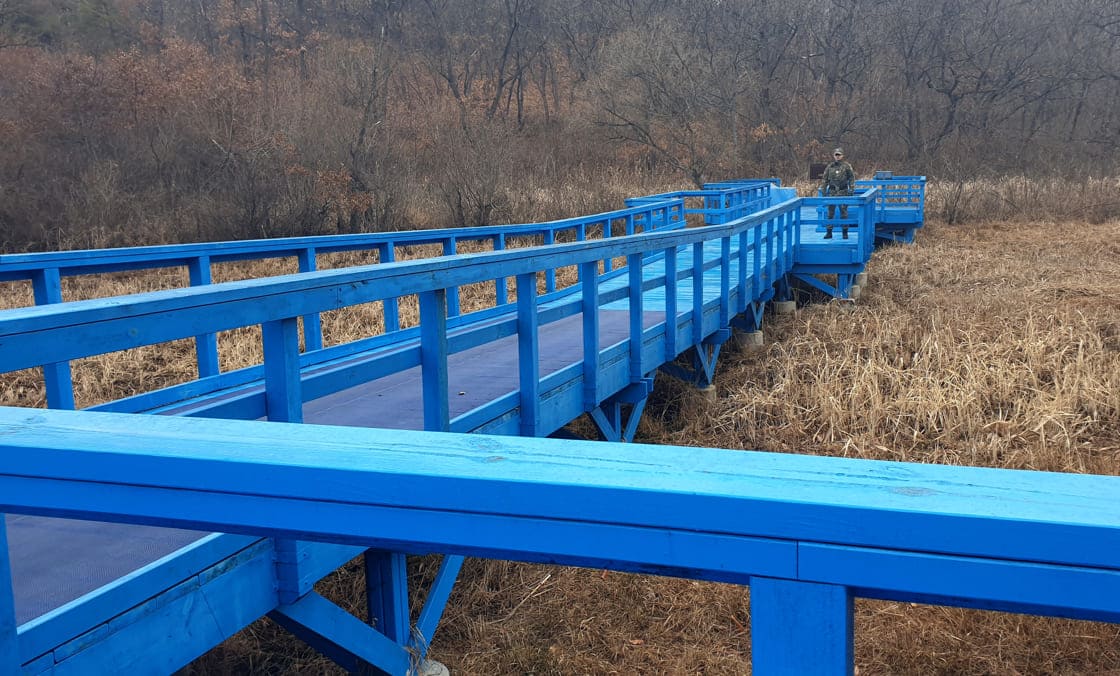 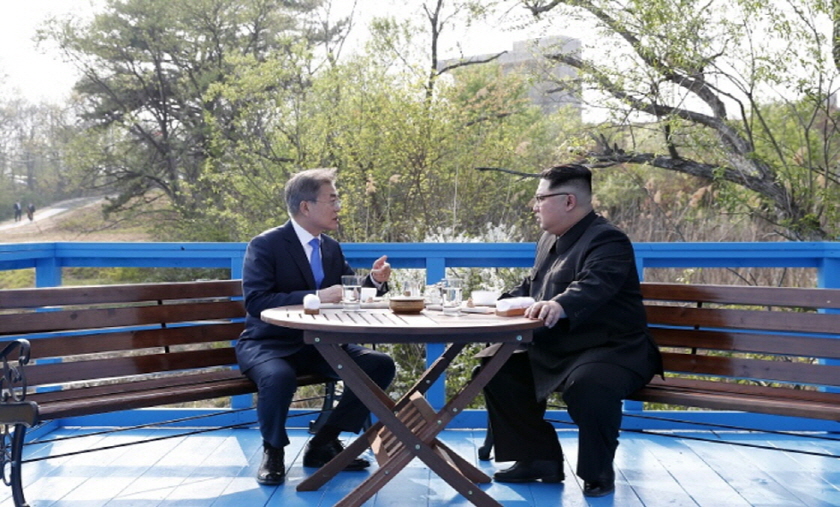 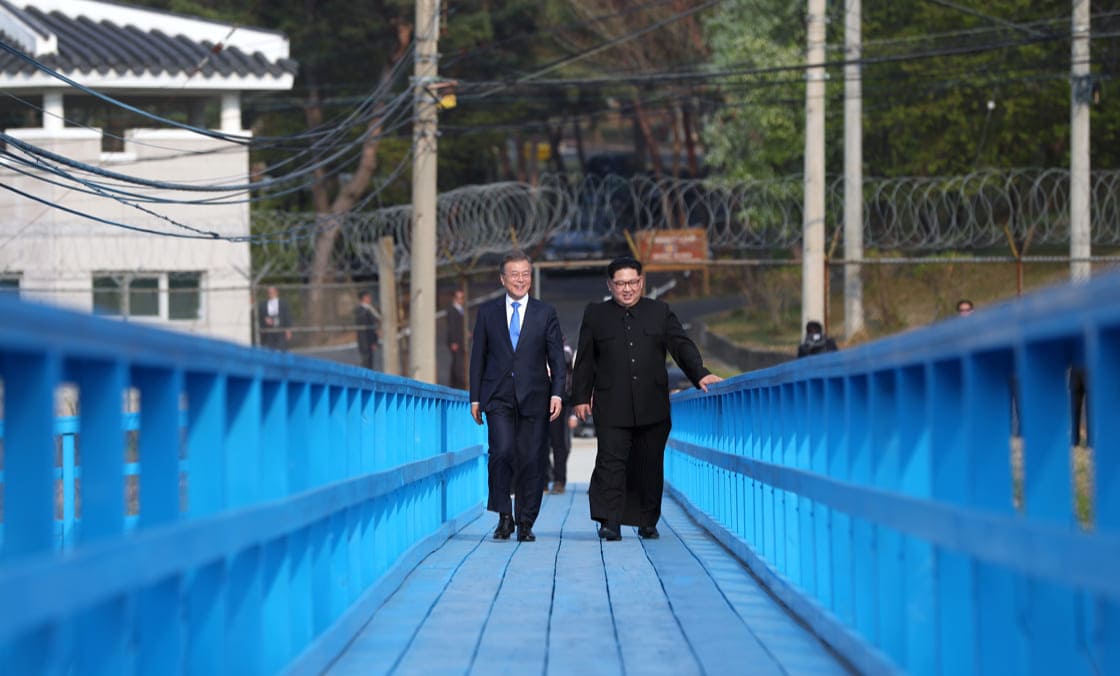 The Bridge of No Return

The bridge spans the Sacheon River, which flows on the west side of the JSA and behind Peace House. The MDL divides the bridge, which was used for prisoner exchanges after the signing of the Armistice Agreement in 1953. The name originates from the final ultimatum that was given to prisoners of war brought to the bridge for repatriation. Once they chose to cross the bridge, they would never be allowed to return.

After the Axe Murder Incident in 1976, the bridge was closed for security reasons. A separated security system was introduced to prevent a repeat of the violent confrontation between the two sides. As a result, the MDL was drawn through the JSA, and two sides are never allowed to cross the line.

The North Korean side has used the Bridge of No Return to enter the JSA, but after the bridge was closed in 1976, the North rushed to build a replacement structure. It was named the 72-hour Bridge because that was the time in which it was hastily put up. People from the North now enter Panmunjom via this bridge. 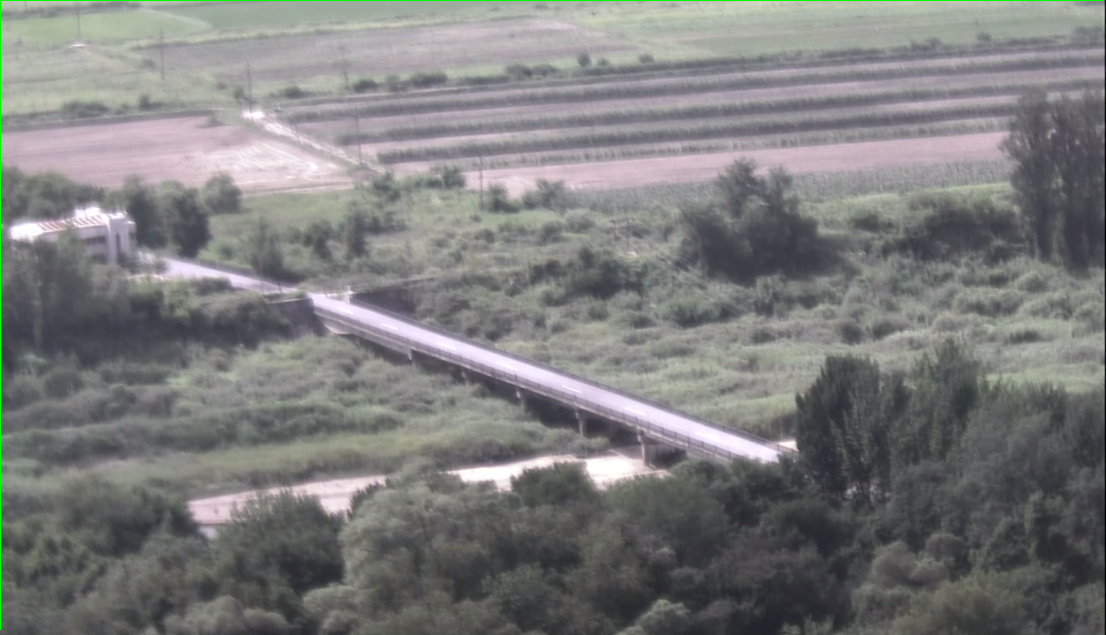