Panmunjom is 60 km north of Seoul and 10 km east of Gaeseong (in North Korea). This is the Joint Security Area (JSA) that straddles the Military Demarcation Line (MDL) on the Demilitarized Zone (DMZ) near Paju.

The 25th plenary meeting of the Military Armistice Commission (MAC) convened in October 1953, and the representatives of the UN and Communist forces agreed to establish the JSA inside the Military Armistice Commission Headquarters Area (MACHA), which is on the MDL, to operate MAC going forward. This resulted in the establishment of an oval area measuring 800m wide by 400m long to serve this purpose. Initially, soldiers from both sides stood guard together in the JSA, but the area was divided in the wake of the "Axe Murder Incident" on August 18, 1976. Since then, soldiers from the UN side have guarded the south side of the MDL, while soldiers from the Communist side have stood on the north side. However, the leaders of the two Koreas during the 2018 summit conference in Pyongyang agreed to ensure free movement and demilitarization inside the JSA. The guard posts were sealed, and weapons were no longer carried inside Panmunjom. The negotiations for free movement are still under way. 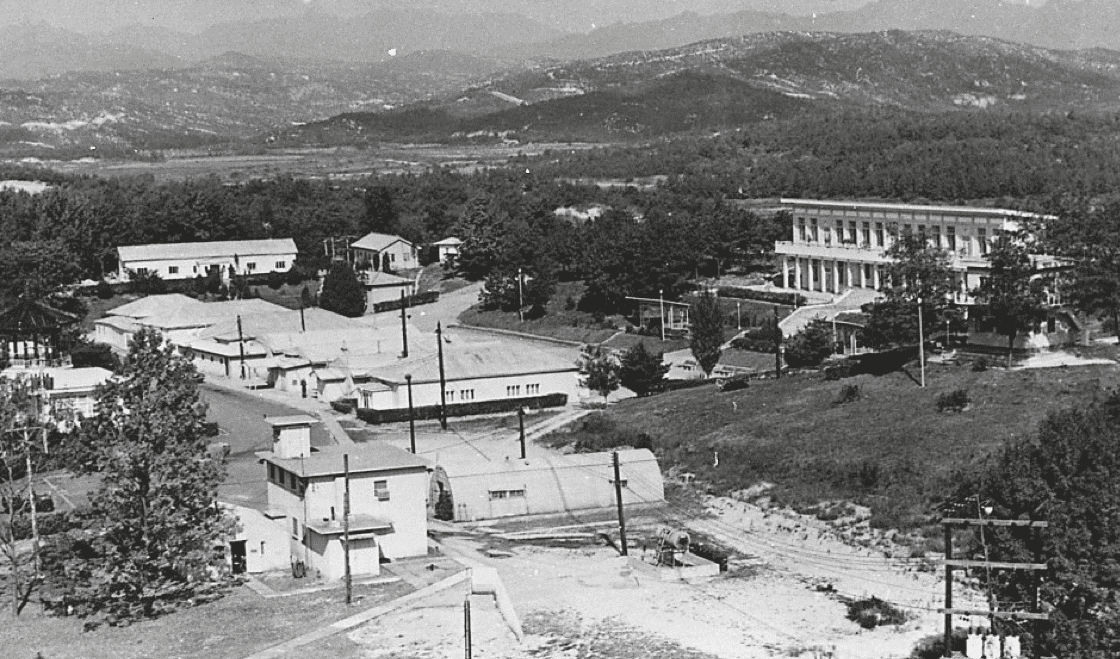 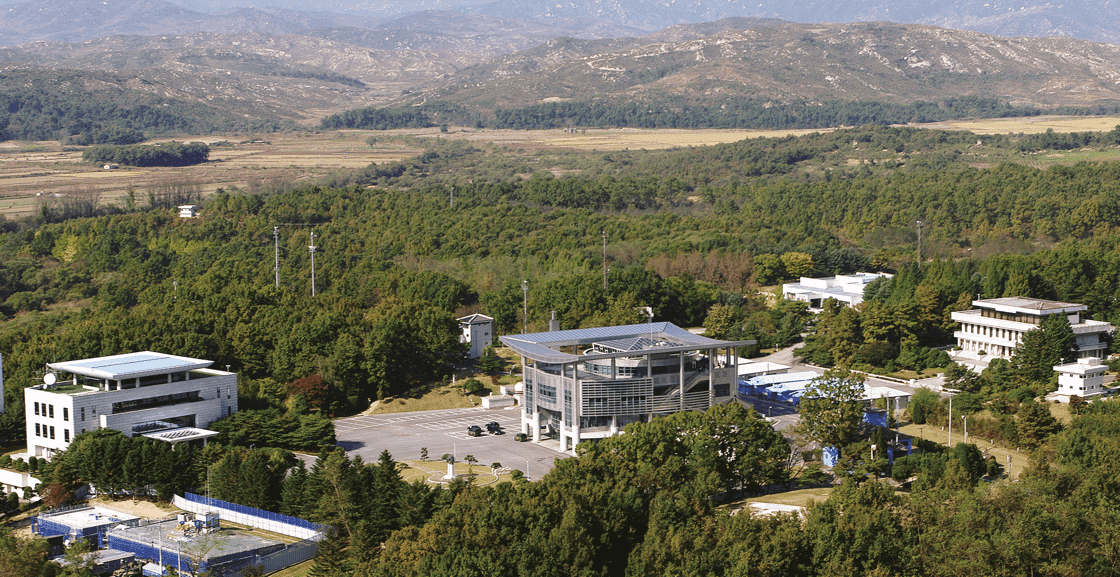 The story behind Panmunjom

Panmunjom was not the site where the Korean War armistice talks began. The initial discussions for a ceasefire convened on July 8, 1951 at Naebongjang (來鳳莊), a luxurious restaurant in north Gaeseong. The talks were suspended after the North Korean army engaged in deliberate provocations in the vicinity. The UN demanded the site be moved, and the North Korean side offered to relocate it to a small rural village called Neolmun-ri. The UN side accepted that proposal, and the liaison officers from both sides met on October 22, 1951, agreeing to resume the suspended truce talks there. 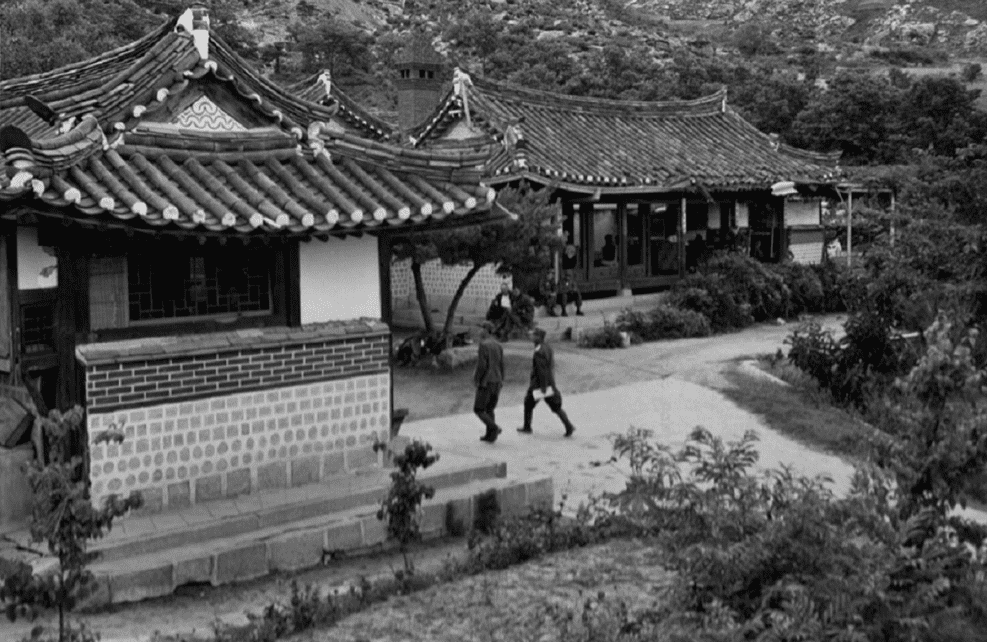 Naebongjang in Gaeseong, where the first armistice talks were held on July 10, 1951, while the Korean War was still being fought.
The name Neolmun-ri

Three different stories have been told concerning the origin of the name Neolmun-ri.
Neol (널) is a native Korean word for “plank” or “board,” while mun (門) is Sino-Korean for “gate” or “door,” and ri (里) is the administrative unit for “village.”
According to the first story, the village was so named because many of the homes there had plank gates.
A second story claims the name came from a wooden plank bridge that stood near the village.
Meanwhile, the topography of the area around the village is wide open, and the native Korean word for “wide” or “broad” is neolbeun (넓은).
Therefore, the third story contends that the name Neolmun-ri is a simplification of Neolbeun-ri, or “Broad Village” in Korean.

The conference venue at the new location was set up in a soybean field in front of an establishment that doubled as a tavern and a shop. The shop signboard was written in Chinese characters for the convenience of Chinese delegates, and it read Panmunjom (板門店), with pan (板) being the Sino-Korean equivalent for neol, or “plank,” and jeom (店) meaning “shop” or “tavern.” 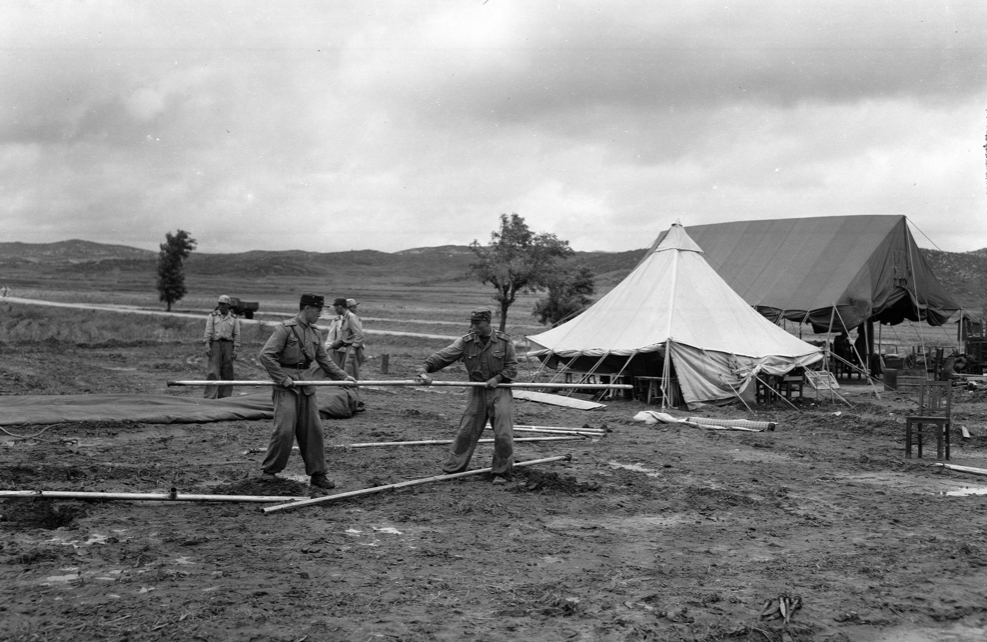 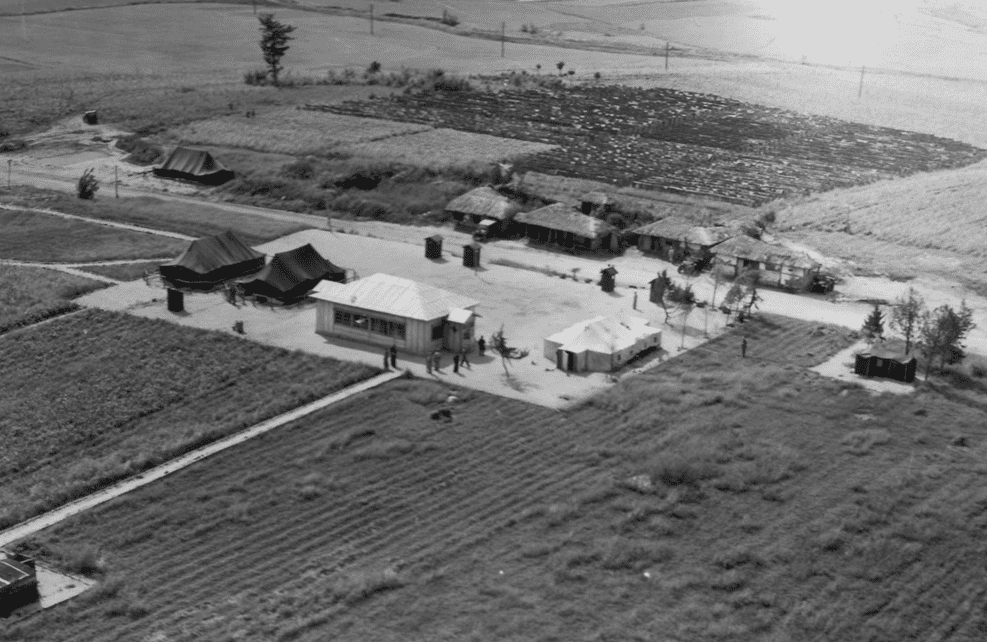 A birds-eye view of the truce talks venue in the early stage
September 18, 1952 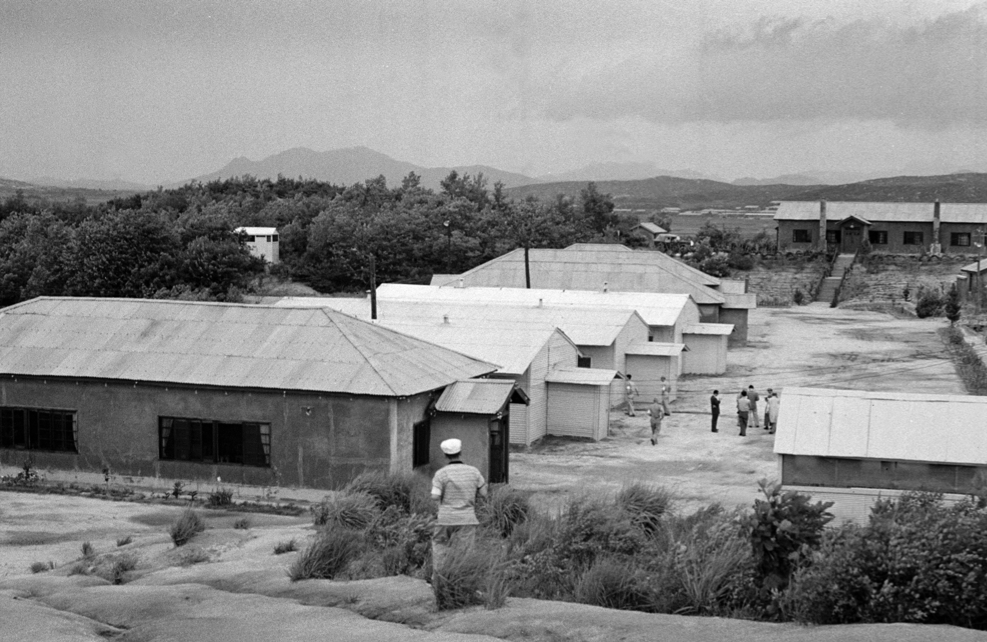 The Armistice Agreement was concluded at Panmunjom on July 27, 1953, after 765 rounds of talks, including 159 plenary truce talks. However, the Armistice Agreement was signed at a location one kilometer outside Gaeseong. Panmunjom was designated by mutual agreement in October 1953 to serve as the location for future meetings between the two sides.

Currently the southern half of Panmunjom is part of Jinseo-myeon, which is under the jurisdiction of Paju, while the northern half belongs to Panmun-gun, part of Gaeseong. Panmunjom is at the Military Armistice Commission (MAC) Headquarters in the DMZ. Civilians do not reside in the JSA, but the two sides agreed to allow two residential communities near Panmunjom, Deaseong-dong to the south and Gijeon-dong to the north. Only the families who had lived in these rural communities during the Korean War can live there today.

Panmunjom is 60km north of Seoul and 180km south of Pyongyang; its coordinates on the map are 37 degrees, 57 minutes north latitude and 126 degrees, 40 minutes east longitude.

Passageway across the barrier

Panmunjom was the only way to travel directly between the two Koreas after the signing of the Armistice Agreement in 1953 until the opening of the east and west rail lines on the Korean peninsula in 2000. About 82,000 North Korean and Chinese POWs and 13,000 UNs POWs were exchanged through Panmunjom between August 5 and September 6, 1953. On the civilian front, members of separated families and art troupes have passed through Panmunjom to visit the other side. Chung Ju-yung, the late founder of Hyundai, made two visits to the North in June and October 1998, accompanied by a total of 1,001 head of cattle. Today Panmunjom is no longer the only way for people from the South to visit the North because the old Seoul-Sinuiju road was reopened on the western side of the peninsula and an overland route was opened on the east coast. 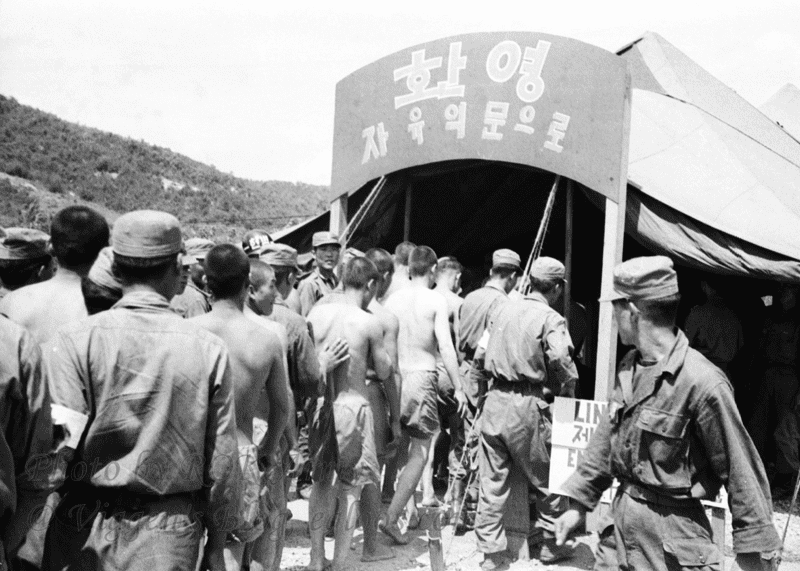 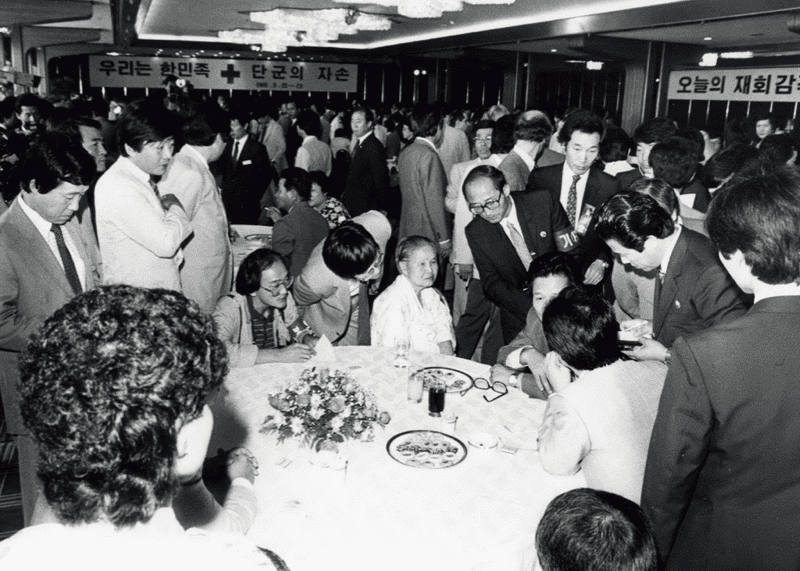 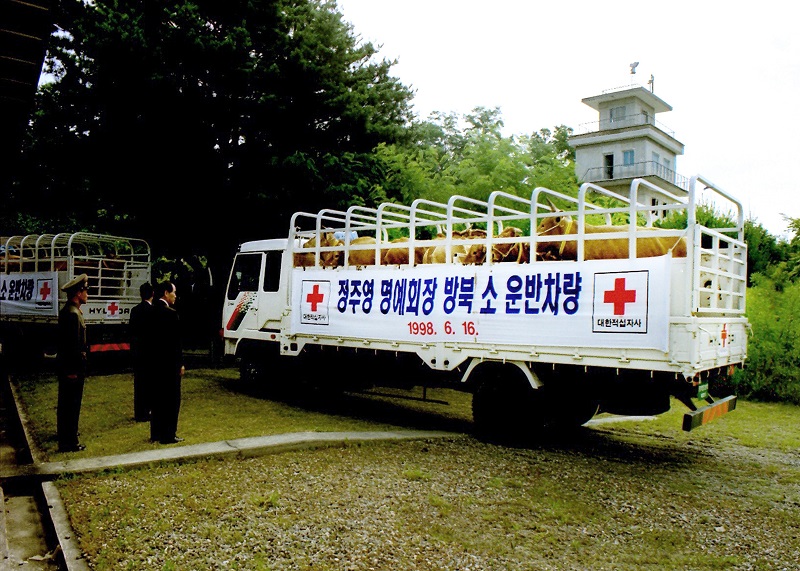 From military area to venue for inter-Korean dialogue and meetings 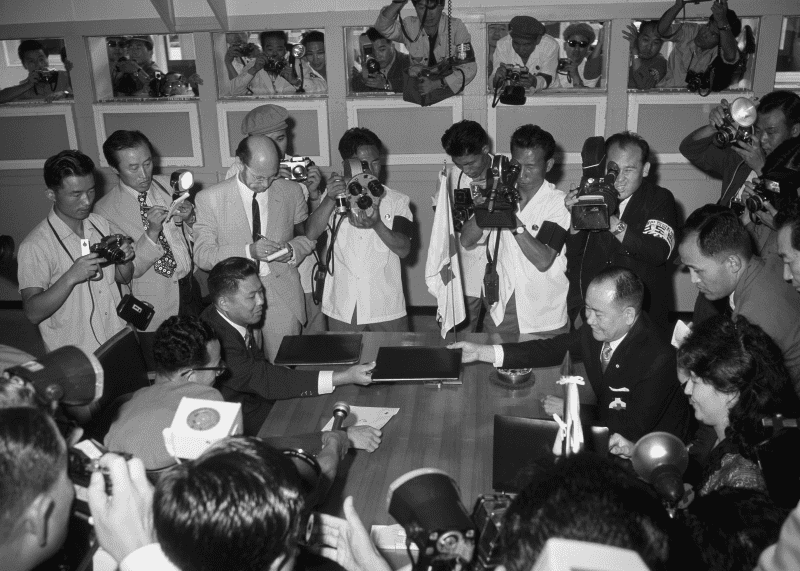 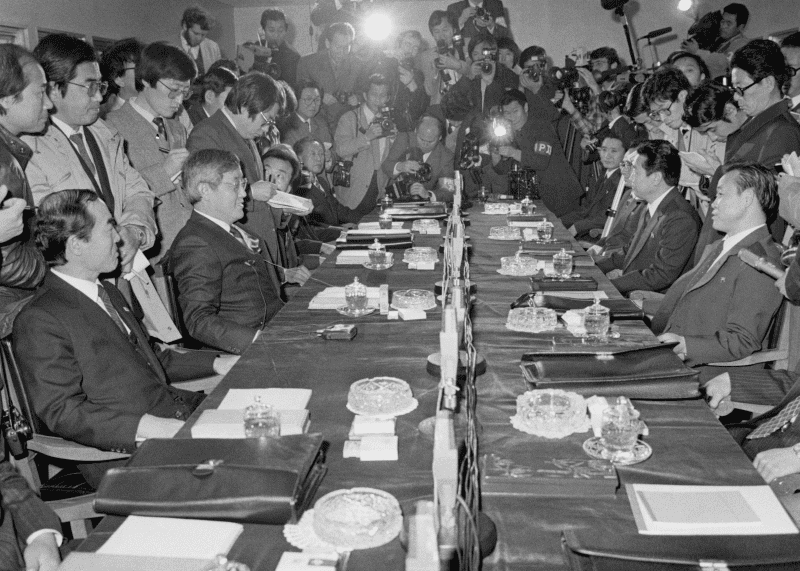 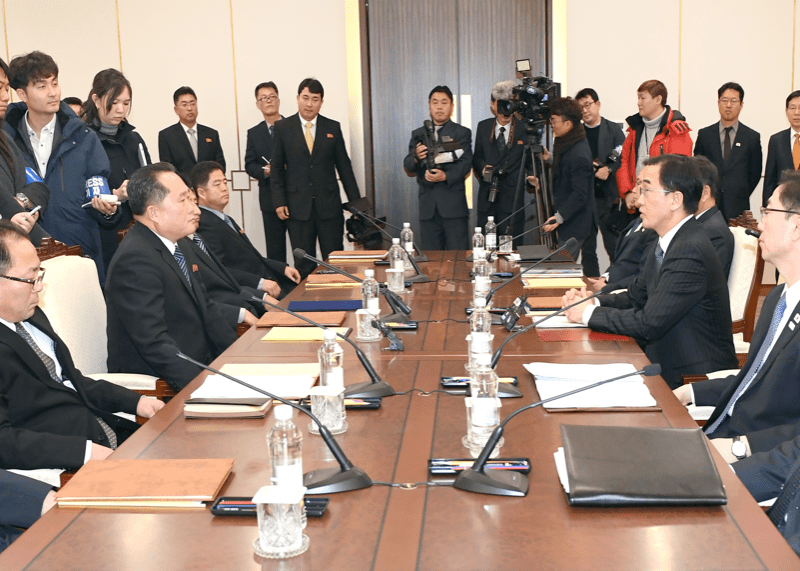 Panmunjom has emerged as a historic site for furthering the cause of peace since 2018. An inter-Korean summit took place on April 27, 2018 at Peace House, inside Panmunjom. The Panmunjom Declaration for Peace, Prosperity and Unification, a breakthrough in inter-Korean relations, was announced at the conclusion of this summit. The inclusion of "Panmunjom" in the official name of the declaration helped to promote the site as the starting point toward peace. The Pyongyang Joint Declaration and Comprehensive Military Agreement announced on September 19, 2018 states that the actual demilitarization of the DMZ is now being pursued. Panmunjom was back in the global spotlight in June 2019, when the leaders from two Koreas as well as from the U.S. met here, and a U.S. President stepped onto North Korean soil for the first time in history. Those events have made Panmunjom a symbol for peace on the Korean peninsula. Peace House, where the Inter-Korean summit was held, Freedom House, where the U.S. and North Korean heads of state met, and Foot Bridge, on which the leaders of the two Koreas walked together, have become tourist attractions for domestic as well as foreign visitors. 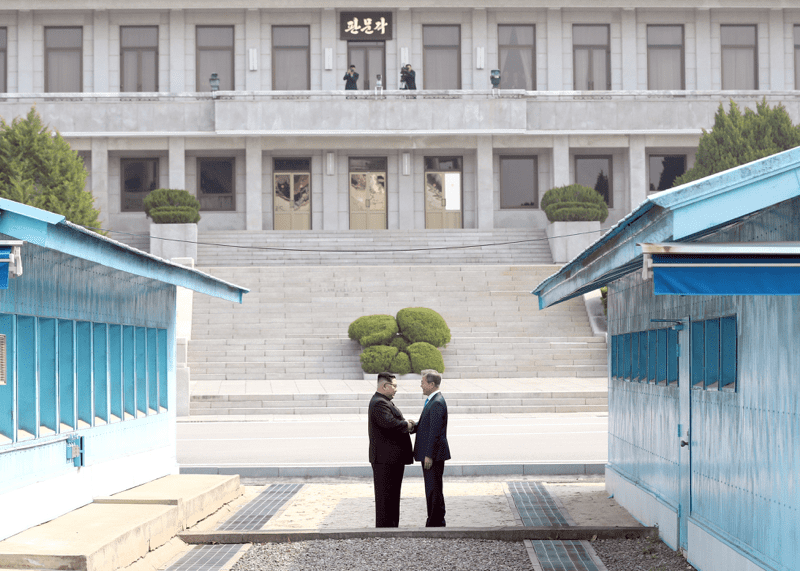 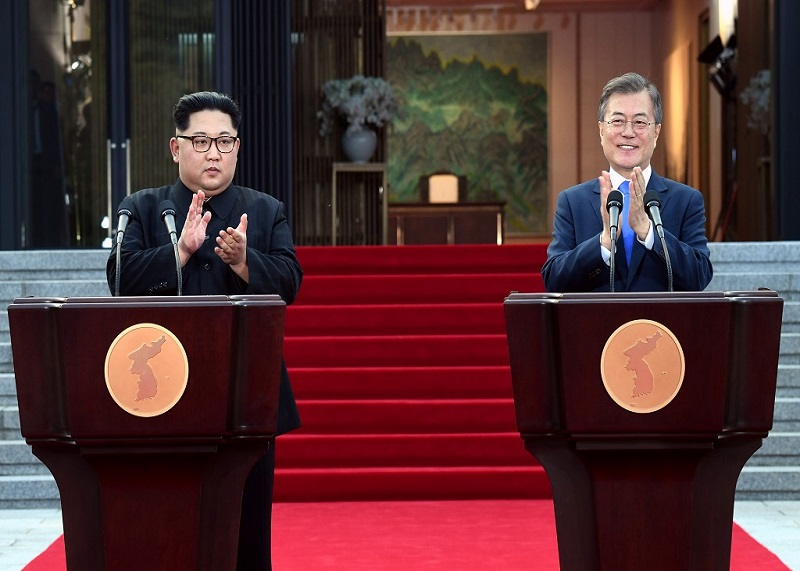 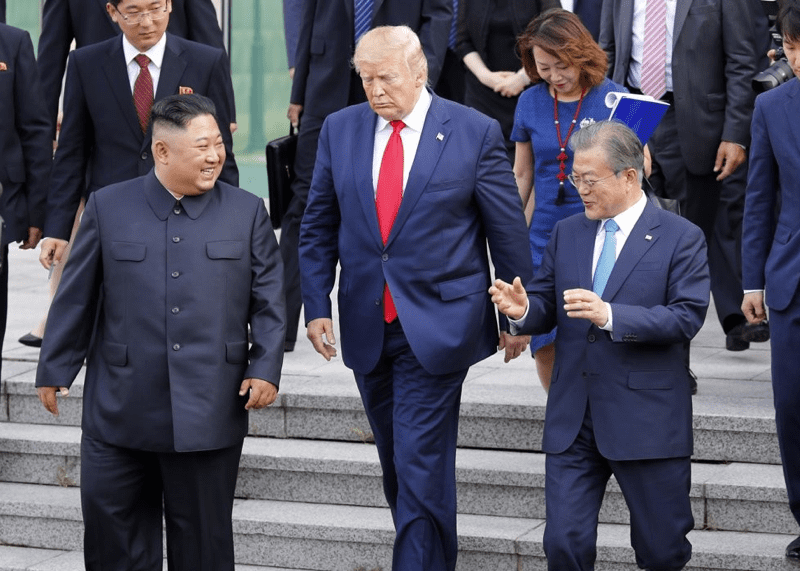