The defection of Lee Soo-geun

Lee Soo-geun was vice-president of the North Korean Central News Agency. He was covering the news at Panmunjom on March 22, 1967. He suddenly jumped onto the car of Brigadier General Van Claft, the UN representative to the meeting, and defected to the South in a hail of gunfire. Lee was treated like a hero in the South and he delivered many speeches to inform the South Koreans of the reality of the North, but then he was arrested on charges of espionage in 1969 and hung just two months after he was sentenced to death in court.

His innocence was proved through the investigation by the Truth and Reconciliation Commission of Korea on January 2007. According to the Commission, the case was manipulated by the KCIA. In reality, Lee was seeking asylum in a neutral nation to escape the KCIA’s excessive interference and control and out of concern for his family. The Seoul High Court ruled him innocent in a December 2008 retrial, acknowledging he had been murdered by the state. 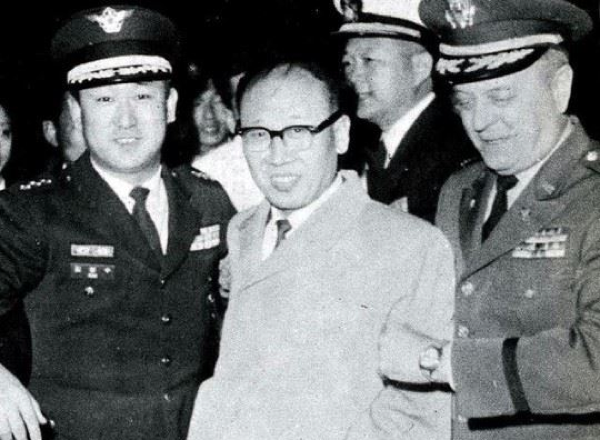 Lee’s arrives at the US military installation at Yongsan
March 22, 1967 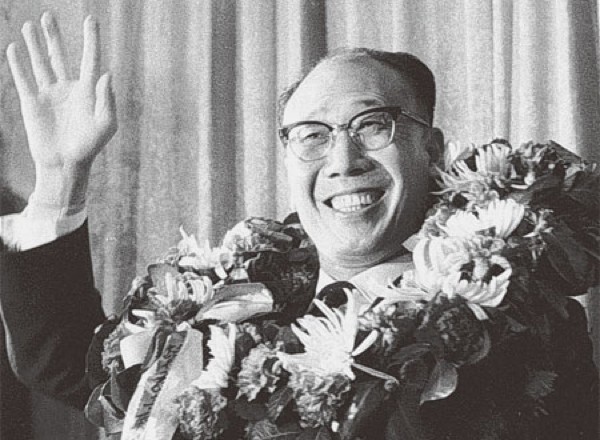 Lee at a press conference held at Press Center
April 1, 1967 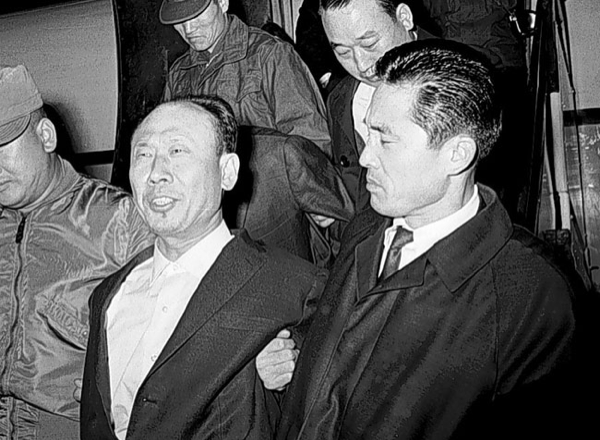 On August 18, 1976, the United Nations Command Security Battalion (UNCSB-JSA) set out to prune a large poplar tree, which had been blocking the view of the UNC guard posts near the Bridge of No Return. Although the UNCSB-JSA had notified the Korean People’s Army in advance, the KPA guards shouted at the ROK workers and the UNC guards, ordering them to stop pruning. When the workers continued, KPA guards suddenly attacked the UNC guards with axe handles and killed two UNC officers. Three days later the UNC carried out Operation Paul Bunyan, cutting down the tree. In the aftermath of the murders, the JSA was divided to prevent clashes, and the Bridge of No Return was closed. The concrete slab over which President Moon crossed had been laid after this incident. 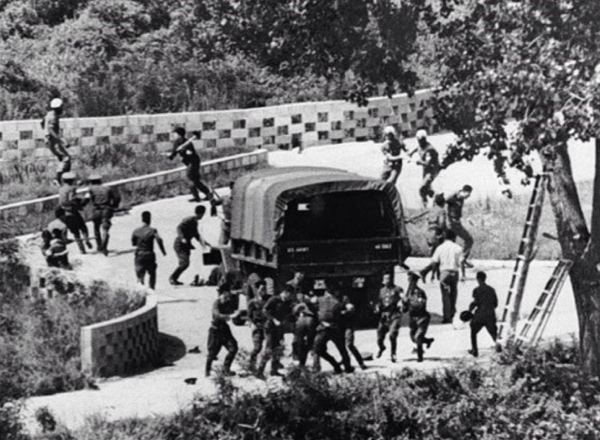 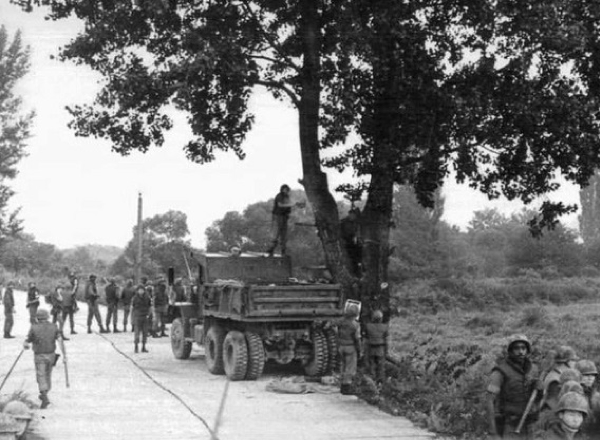 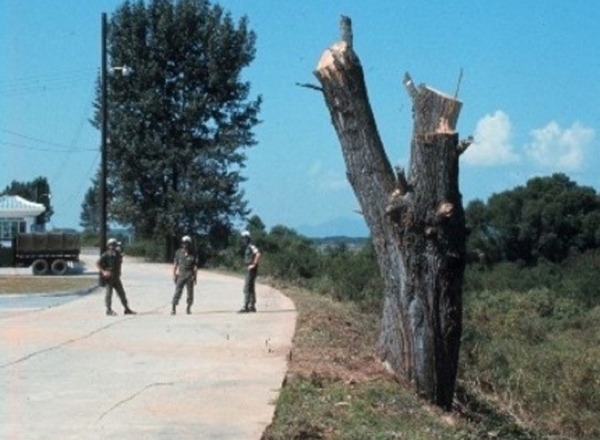 On November 23, 1984, a Soviet reporter named Matauzok was visiting the JSA on the North Korean side when he suddenly rushed across the MDL. The surprised KPA guards pursued him, firing their pistols and crossing to the South Korean side of the MDL. A 30-minute firefight ensued in front of Freedom House. Three KPA guards, one UNC guard and a South Korea Army private were killed. 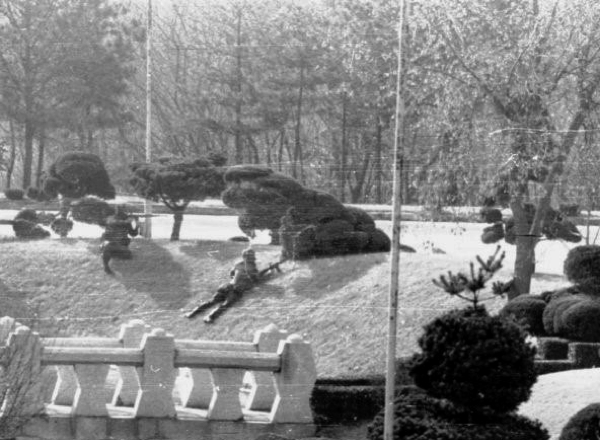 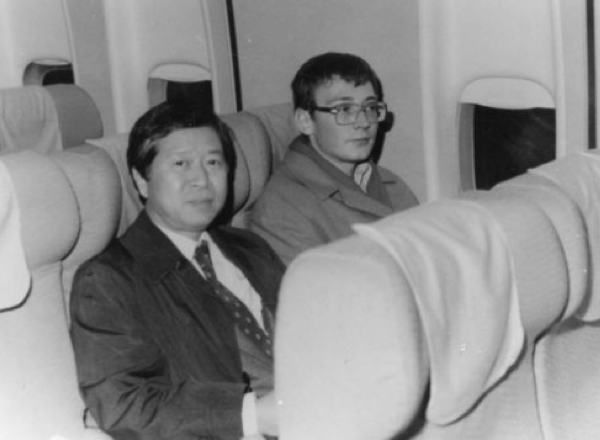 Matauzok on a flight to Rome 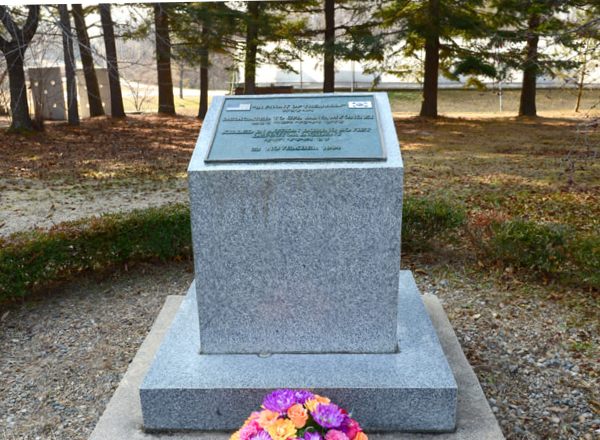 First repatriation of civilians through Panmunjom

The college student Lim Su-gyeong and Father Moon Gyu-hyun were repatriated through Panmunjom. Lim had visited the North to attend the 13th World Festival of Youth and Students as the representative of Jeondaehyop (now the South Korean Federation of University Student Councils). She had departed from Seoul in June 1989 and entered the North via Tokyo and West Germany, without first obtaining a travel permit from the South Korean government. Father Moon also illegally visited the North as a representative of the Catholic Priests' Association for Justice to accompany Lim on her return to the South. The two activists were arrested on charges of violating the National Security Act after they entered South Korea via Panmunjom. 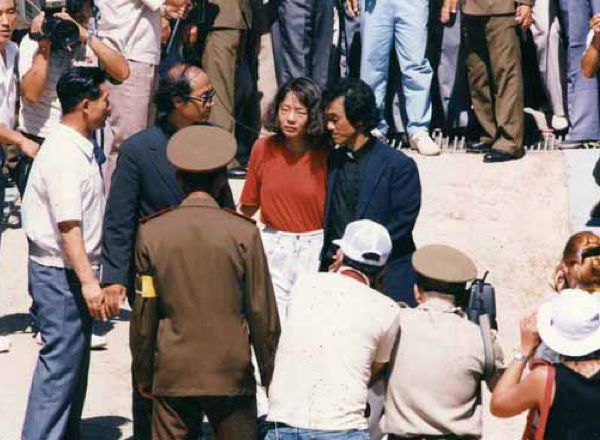 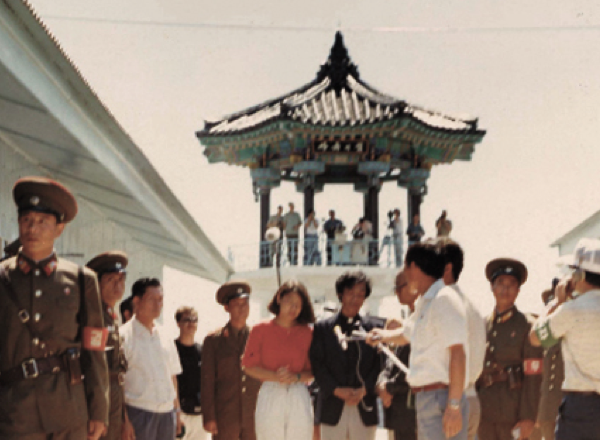 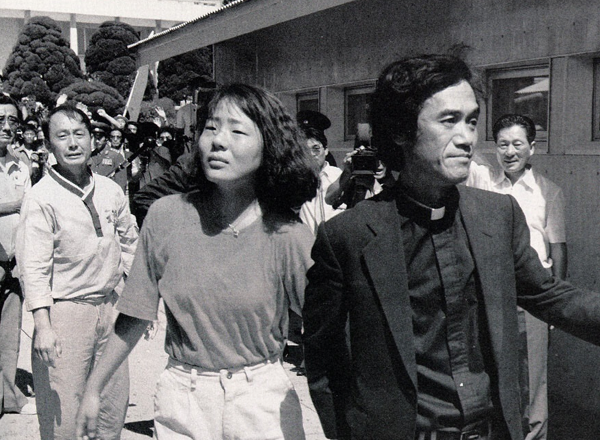 Former U.S. President Carter’s visit to the North and return through Panmunjom

North Korea’s provocative rhetoric such as "turning Seoul into a sea of fire" caused tensions to rise on the Korean peninsula in 1994, prompting former U.S. President Jimmy Carter to visit the North with his wife Rosalynn via Panmunjom. The North Korean deputy foreign minister greeted President Carter on the North side of Panmunjom. President Carter met with Chairman Kim Il-Sung in Pyongyang, came back to South Korea, and met the South Korean President Kim Young-Sam. 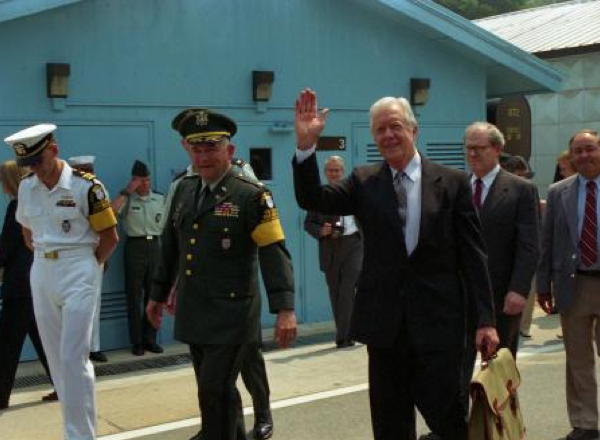 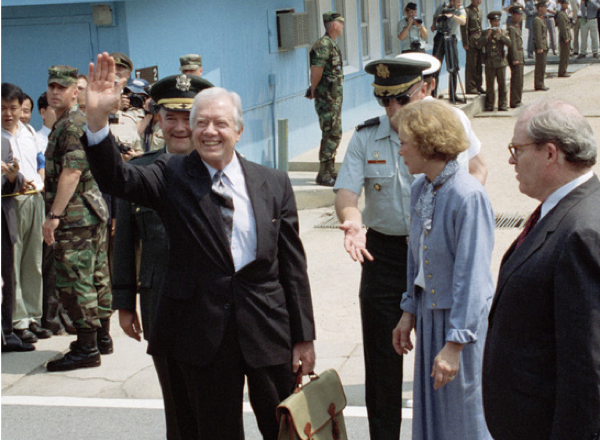 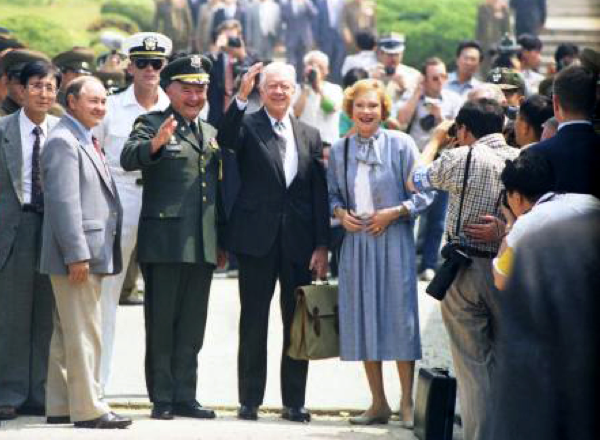 Chung Ju-yung’s visit to the North with cattle

Hyundai Group Founder Chung Ju-yung visited the North twice in 1998. He traveled across the MDL in a convoy of trucks carrying 500 head of cattle on June 16 and then with an additional 501 head of cattle on October 27. His visits became the important cornerstone of inter-Korean civilian exchanges. 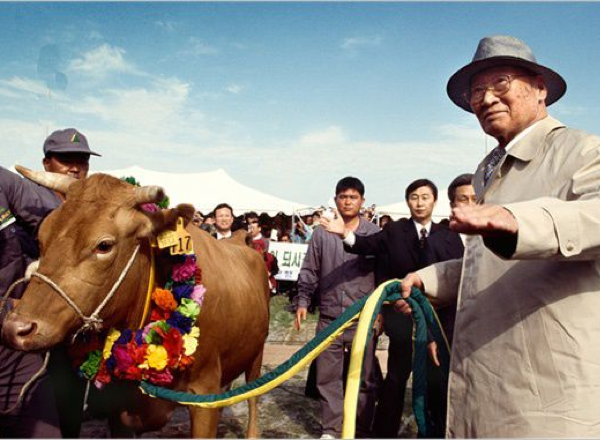 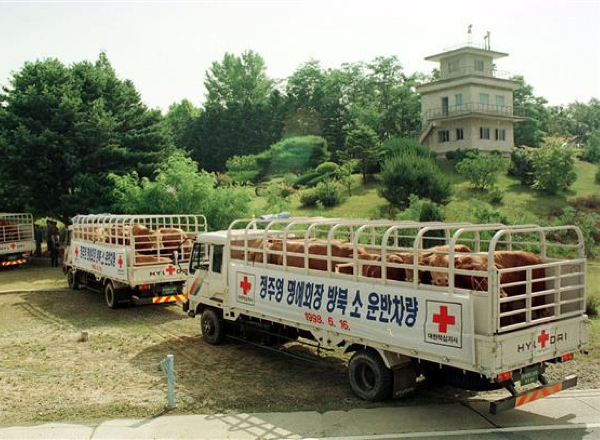 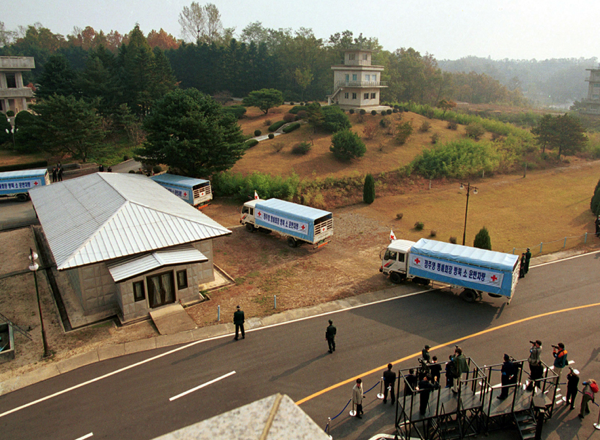 Oh Chong-song, a sergeant in the Korean People’s Army, defected to the South by crossing the MDL. During his escape, he was shot multiple times and severely wounded. Oh was transported to the Ajou University Hospital and regained consciousness after several operations. 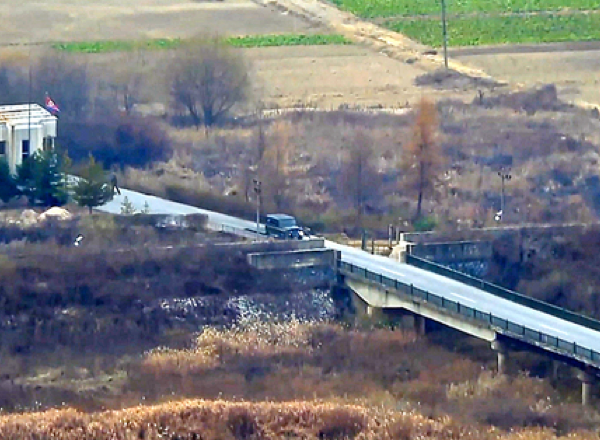 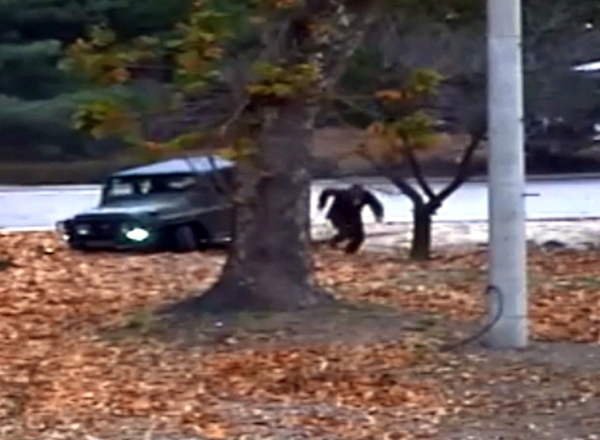 Oh exits the car after it crashed in a drainage ditch
November 13, 2017 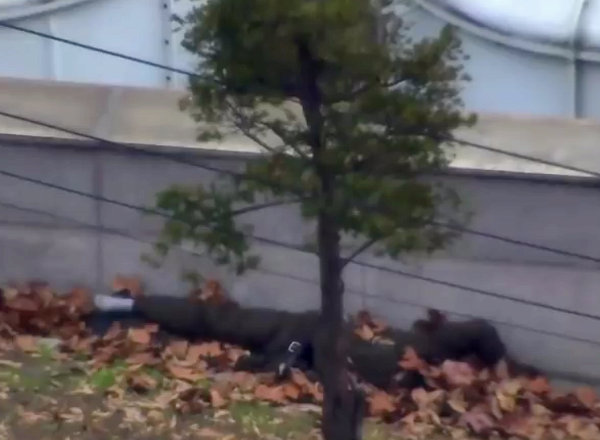 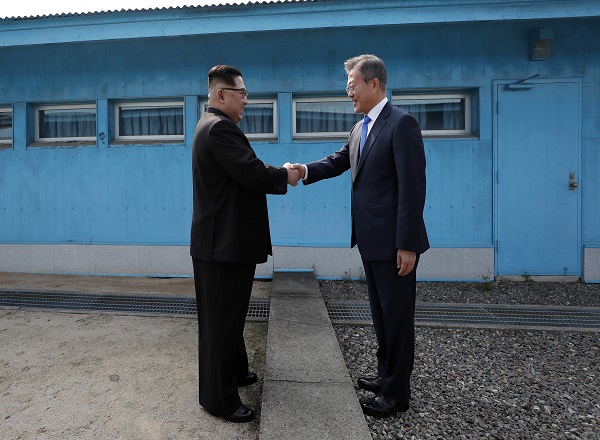 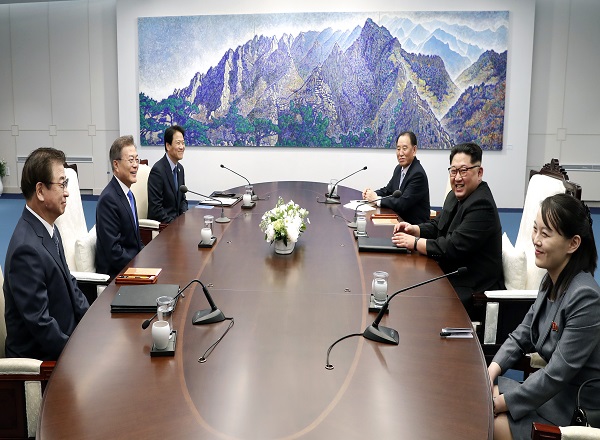 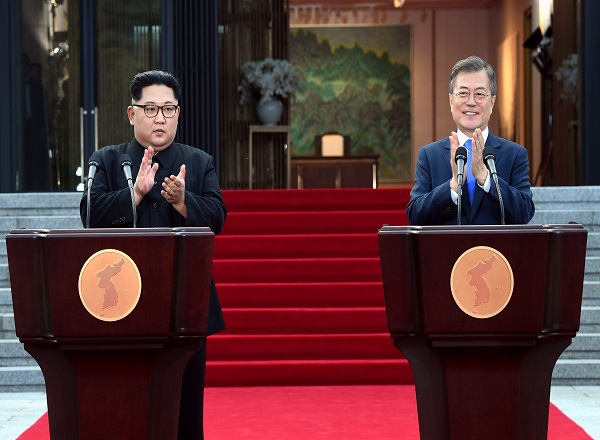 The second Inter-Korean Summit was held on May 26, 2018 at Tongilgak inside Panmunjom. The two leaders had frank discussions on the denuclearization of the Korean peninsula. 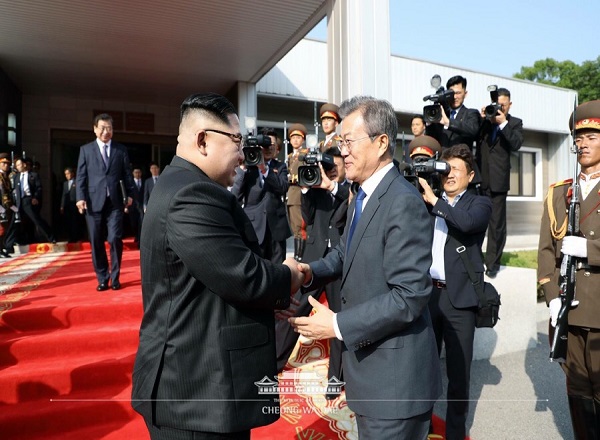 The leaders shake hands in front of Tongilgak
May 26, 2018 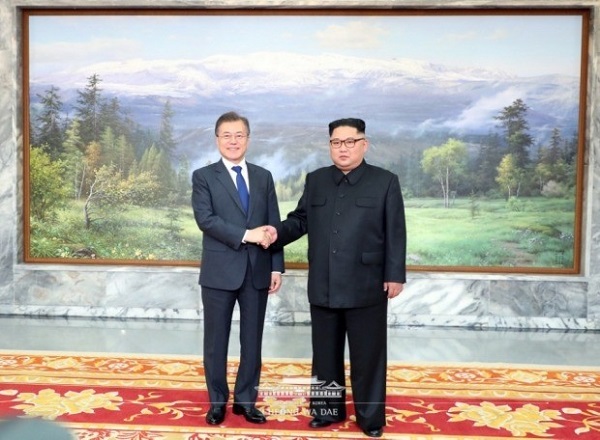 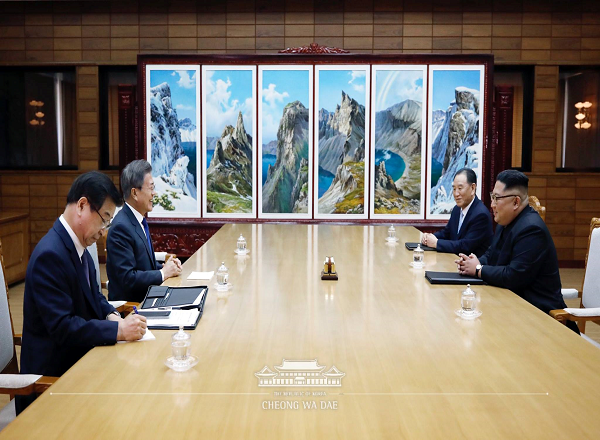 U.S. President Donald Trump and DPRK Chairman Kim Jong-un greeted each other across the MDL and then had a summit at Freedom House inside Panmunjom on June 30, 2019. On this day, South Korean President Moon accompanied them to support their talks. 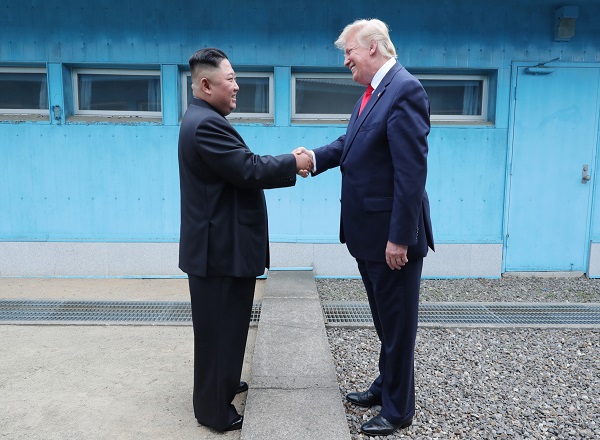 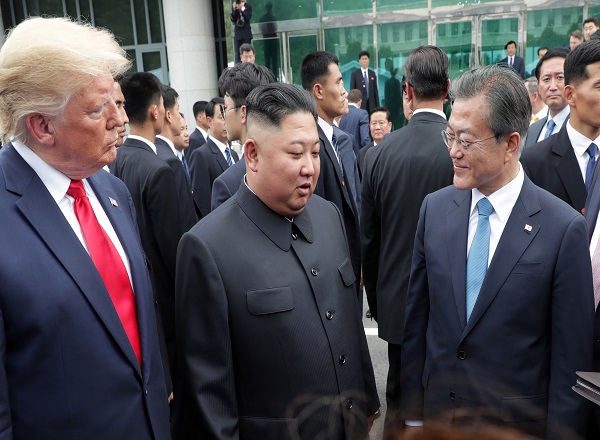 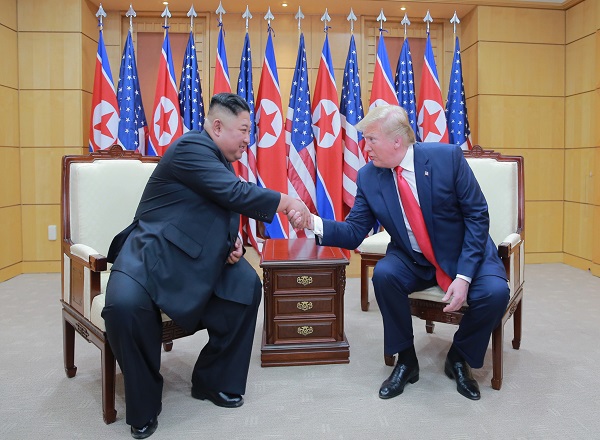